If Governor Inslee said tomorrow, “You know what? Screw it. Everything’s open, all restrictions are off, and you can go back to living like you were in January,” millions of people across Washington would be completely paralyzed. Without Olympia telling them how to be good people, they’d be hugging their computers and watching the dead feed from the public access channel, wondering what he meant.

For anyone feeling unclear about exactly what a Catch-22 is:

“The parks are open for your enjoyment! But if you go there, we’ll close them.”

There aren’t enough ex-PFC Wintergreens among us.

Your official ballad for the Wuhan Virus:

Don’t say it’s over
Cause that’s the worst news I could hear.
I swear that I will
Do my best to be here
Just the way you like it.
Even though it’s hard to hide,
Push my feelings all aside
I will rearrange my plans
And change for you.

I guess that “computer glitch” got fixed – or rather it fixed itself, didn’t it? If glitches happen on their own, why not solutions? I suppose that’s rather telling (and easy to spot when you’ve been raising small children), that we can’t take blame for creating problems, but we’re always raising our hands when they’re fixed (insert your plague management parallel here).  Back to it – and it’s like Toy Story for middle aged men: 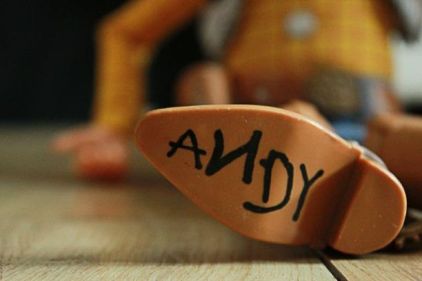 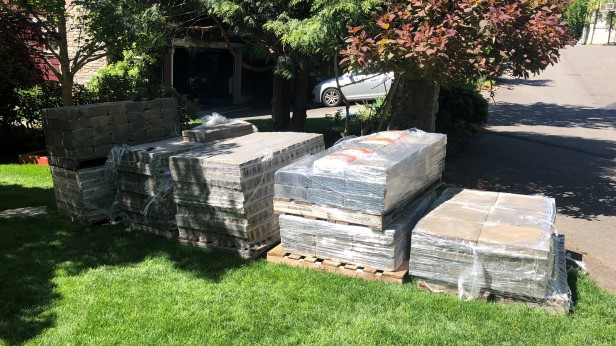 I’ve told you that we have pretty great neighbors here on our not-so-dead end street. Yesterday one of them, having seen, heard, smelled (or some combination of the three) all those beautiful blocks and slabs unloaded, sauntered into my yard with a water bottle and a pair of gloves and asked “what do you need me to do?” Well, friend, I don’t need you to anything more than be the generous man you are. He wound up working like a grunt, running wall blocks in twos, from the pallets to the patio, about 20-30 feet away. From there I stacked them.

As is true in every part of life where it’s possible, thorough prep made the job easier. This first course went down quickly, and with very few tweaks and mallet-taps for leveling:

Once that and the other leg were down and verified square, the only thing left was the running and stacking and gluing: 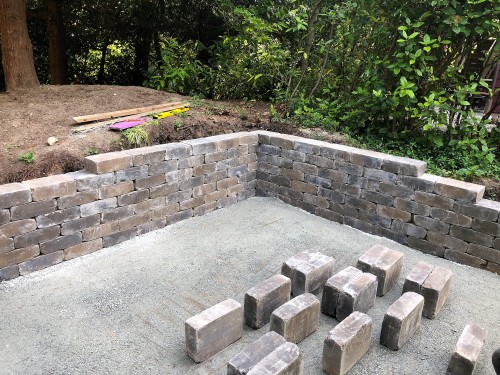 And stacking and gluing:

There’s about 40 more wall blocks to stack, then the capstones. I’m hoping I have enough adhesive. Normally, that close to completion, I would have driven through to the end. Alas, my neighbor’s kids – 3 and 5 years old – were starting to need a little too much attention, 6:30 was approaching, and I couldn’t keep things up much longer without eaing some food. Cleaned up the site and turned in.

After dinner we had s’mores, cooked over the propane fire table: 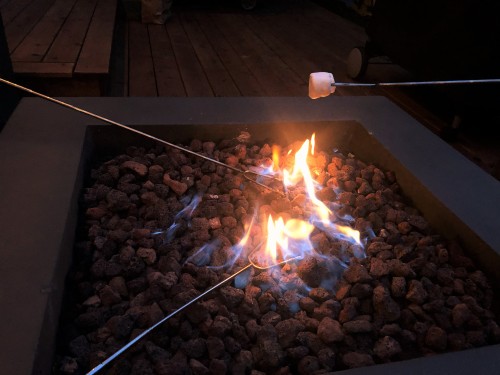 I might get to starting on the actual patio pavers today, but I do still have to:

I’m guessing that I’ll be working right up to the point where I’m ready to start laying the sand, stop right there, then clean up and get a fresh start on Sunday.

— You won’t be shot if you’re crazy, but you aren’t crazy if you don’t want to be shot, Comrade Citizen!—