Look, it’s not difficult. Nor is it pleasant. We’re simple. We’re not as brilliant or clever or free-thinking as we’d like to believe. If Washington state were here today with the lone difference that Governor Inslee were a Republican, having done everything exactly the same way as he has done them as a Democrat, the praise would be coming from conservatives, and the condemnation would be coming from the liberals. That’s it. Period. Don’t fool yourself.

“But if he was conservative he wouldn’t – ”

So people pretty much stopped going to the ER for anything remotely related to the Wuhan Flu in what, March? Early April at the latest? I know the obvious response is “because restrictions, boomer,” and the follow on is that “if we relax now we’ll see a dramatic resurgence.” Fine, whatever, have your petty little preparation for the coming election. Make it look like something that can only be salvaged and repaired by anybody not named Trump. Just be honest about it. I would skip, whistling, into an Orwellian 1984 reality if the people throwing that particular party would just admit what they were doing. I swear I’d take confinement over pandering and sanctimonious head-patting ten times out of ten, if my jailers would just look me in the eye and say:

“We’re really just doing this to control and defeat you, out of a feeling of spite that we can’t quite locate the source of, and a general desire for absolute power.”

“So you’re not saying that this is for my own good, or that I should trust you or anything?”

“Oh, goodness no! Lol! We just want to grab everything we possibly can, hoard it among a few very powerful people, and not have any of you morons getting in our way.”

“Excuse me, ma’am. I meant to say ‘show me to my comfortable new lodgings.”

The donuts were a chocolate cake variety, with peppermint glaze:

They are very good, of course, but she’s made them 3 times in a row now. And me, I like a nice, puffy raised ring, rolled in cinnamon and sugar. I wish she’d do those, but she can require some nudging, sometimes, to leave her comfort zones. Can’t we all? I’ve gone through several of the more creative offerings at my favorite bakery (though honestly they’re pretty old school and don’t do much to appease the foodie crowd) and have settled on two basics: the aforementioned cinnamon/sugar, as well as the Thursday special, which is a glazed buttermilk knot.

My wife is going to drive into the office today. The big downtown. She hasn’t been there since early March, and is under guidance to work from home until October. If it goes longer than that we’ll be turning the guest room into her office. We’ll take it. It’s been very nice to have everyone here, which is how I know we’re doing things well, as a family.

It doesn’t look much different, but it is. There’s about 3 new inches of gravel on there: 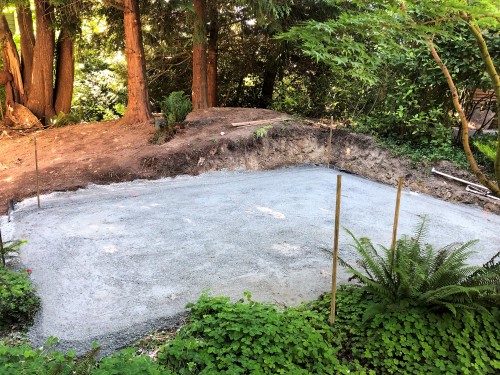 The two wall sides have the channels prepped for the wall blocks. Tamped down and level, ready to be stacked upon. It won’t be as easy as dropping them in and going for the next block – there will be little adjustments, baby tweaks with the rubber mallet to get the bottom course in there just right, but once that’s done it’ll be all about the building up and gluing.

Unfortunately, there’s a materials delay. Of course. Nothing to do with any Chinese viruses. The girl in the call center said they had a “major computer glitch,” which of course means that somebody screwed something up, and the company wants to avoid – as much as possible – being yelled at by angry customers, so they’ve invoked the great ephemeral notion of rogue software. Nobody’s gonna have that argument, you know? It’s just gonna be people like me, knowing that the “computer glitch” is a garbage lie, but succumbing to the realization that pressing the matter isn’t going to get my order here any faster (or end the lockdown any sooner, but I’d hate to have a cohesive theme in my posts). Might actually delay it another day or two (or month or six, but I should really stop with that). I wonder how often they get a guy like me on the line, but who also happens to be a programmer or a software engineer who asks “what was the glitch, exactly? I can help make sure it doesn’t happen again. Maybe transfer me to IT.”

Anyway. It’s a one day delay. It’ll be here tomorrow [the Governor assures me (STOP IT ANDY)].

I overestimated my gravel needs by roughly a cubic yard. But not really! I can use the extra as backfill for the wall. Good drainage material, though a bigger, cleaner gravel would be better. Here’s what’s left:

This is where it started:

The weekend will be glorious. Hopefully the retaining wall will be finished, leaving me only the sand to put down, and the pavers to lay. Dare I project completion by this time next week? We’ll see!

For today, my unexpected down day (except let’s not forget the ongoing homeschooling of The Boy. He’s been doing beautifully), I have two pendant lights to install – one over the kitchen table, and one over the sink. We’re replacing a couple that are ok, but we didn’t realize when we ordered them that they were LED, and far too cool of a white light to be comfortable under.