They’ve revamped the dashboard again. King County is in the cleverly hedged Phase 1.5 of recovery/return. Honestly, it’s difficult keeping up with what it all means. Restaurants can function at 25% capacity, though I doubt that many of them can make any money that way. I know there’s been a robust demand for takeout over the last few months. Assuming that keeps up, maybe combining it with the quarter-full seating will actually be worth it. We’re told, also, that we can hang out with up to 5 people from outside of our immediate families. But of course we have to (it is strongly suggested) wear masks and maintain social distancing. In other words, unless I’ve been sleeping for 3 or 4 months here, there’s no change at all. Other people have always been permissible, if generally discouraged, as long as the six-foot-salve was in place.

I’m looking for the handshakes and hugs phase.

Seemed like kind of a peak weekend for protests. We’ll see if there’s a tapering off on the way. West Seattle did its part:

That’s the primary 4-way intersection of Alaska Street and California Avenue, from whence The Junction gets its name. Someone estimated upwards of 2000 people by the time it was all said and done. It went peacefully and without incident, as far as I know. Nice job, neighbors.

One of the presenters played the National Anthem on his guitar, apparently so everyone could kneel.

At 3:40, black Seattleite Jimi Hendrix tells Dick Cavett why he did it:

The interesting point is that Dick asked about the hate mail that would be generated not because Hendrix played the National Anthem, but because he played it “unconventionally.” Not faithful enough to the original intent. Presumably not respectful enough. Times have changed.

Jimi just said “I thought it was beautiful.”

It’s 50 years gone, so it isn’t very responsible to draw parallels, but it’s right there, anyway. No telling what Jimi would say today.

Our daughter adopted the Japanese maple tree that we just planted. It was part of her “outdoor education” day at school last week: 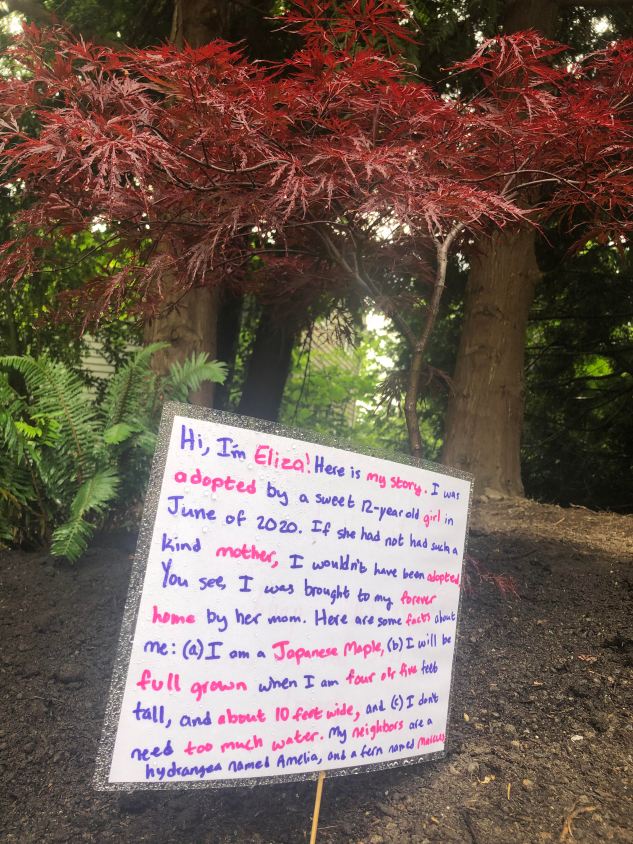 It’s the last day of homework kit exchanges for The Boy’s school. One more week of this stultifying attempt at education. I applaud his school for managing it as well as they have. Realistic expectations are important. There’s a long-running owl pellet dissection project that we haven’t completed, and frankly I have no way of knowing whether we’re behind on or missing anything else. My assumption is that we’re doing fine – that we did fine – and he’ll move on smoothly to 4th grade. It will be highly disappointing if, after 3 months of zero feedback, we’re blindsided by some report that he’s behind. But I really don’t expect that to happen. His school is small, and laid back, and even kind of old-fashioned. And they are fully independent. Yes, on some level they are accountable to (presumably) the state, but they are not a member of any groups or associations of private/independent schools. Just a small, K-5 collection of fewer than 100 students in the back hall of a Baptist Church. I’ll miss that place when he’s done there.

There’s no more dirt in the driveway, and I’m staying project-free for a while. What does that mean? Probably that I’ll start reading The Brothers Karamazov for something to do. I’m always a little happier when I’m reading.