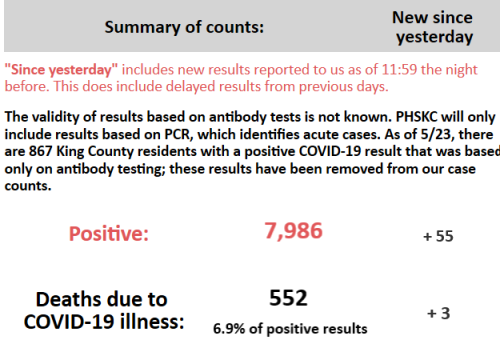 I’m just a guy who forgot to prep the coffee. Again.

But hey, it’s been that kind of week. Inslee spoke again yesterday, ramping up his appearances leading up to our June 1st lockdown deadline. He didn’t say anything about that, though. It was mostly about testing and agriculture. I was just reading snippets of his proclamation “Concerning the Health of Agricultural Workers.” Here:

WHEREAS, under Proclamation 20-25, Stay Home – Stay Healthy, I deemed workers in the agricultural industry, including those working in fruit, vegetable, nut, flower, grain, dairy, and livestock production, to be essential; and…

(emphasis utterly mine, implicitly his)

It’s that language. “I deemed…to be essential.” I’ll give an exceedingly gracious benefit of the doubt and say that the regal assumption of omnipotence implied by the words isn’t exactly conscious and intentional, but power always feels natural to people who don’t appreciate its source. We could stop this all today if we wanted to, and there isn’t a governor in the country who could do a thing about it. But hey, keep on keepin’ on.

He’ll “lift” the stay home order at some point. Maybe June 1st, maybe in another month, I don’t know. I just guess that when he does he’ll announce it like a celebration, smiling and munificent, as if he’s bestowed upon us something glorious, and will just wait humbly over here for the praise we owe him. Then we’ll triumphantly crab-walk, sideways and self-conscious, into our towns and cities, eating in restaurants at half-capacity, feeling watched and scrutinized at the tiniest level. Yay freedom.

He finished by saying that wearing a mask is a sign of your love for your community. I hate that crap. I was once asked by one of the city’s many clipboard crusaders on the sidewalk if I “have a minute to save the children.” So I either stand there and listen to her miserable spiel for a while, or I’m killing children. The moral binaries are so sophomorically embarrassing. I went to a few different places yesterday. I was wearing a mask. Not out of love for my community, but out of fear of them. I don’t want the loving members of my loving community to turn on me. The mask is protection from them. I saw a number of people not wearing masks, and I somehow was able to imagine that they do not hate me, or anyone else.

Coherence to community norms is one way to show you care, yes. But so is recognition of, and respect for, individual independence.

The Boy is not great with the kitties. He loves them and is very kind, and is no danger of going the full Lennie but he simply does not understand the pacing and spacing necessary for cats. He likes to pick them up and move them. His hand movements are a bit too herky-jerky around them. Etc. He does nothing whatsoever to hurt them, but you can almost see their eye-rolls when he comes in the room. The Boy is just a vessel of unsettled speed, and cats are a little too measured to appreciate it.

They’ll probably end up liking him the most.

They had their first visit to the vet yesterday. I parked, called the office to check them in, then left them on the doorstep of the building in the Ikea laundry hamper we’ve been using as a carrier. The real carrier that we ordered arrived yesterday, while I was at the vet. The technician came and brought them inside, and I sat in my car and waited around for the appointment to be over. Ran an errand in there, too.

The cats are healthy. Rae is showing no ill-effects from her 10-foot fall. Vaccinations are moving along on schedule. There will be no de-clawing. I remember doing that to our cats when I was a kid. It was normal – everyone did it. Then one day several years ago I heard that it was frowned upon. Everything has a shelf-life. And now that I have cats, I have a life as a shelf: 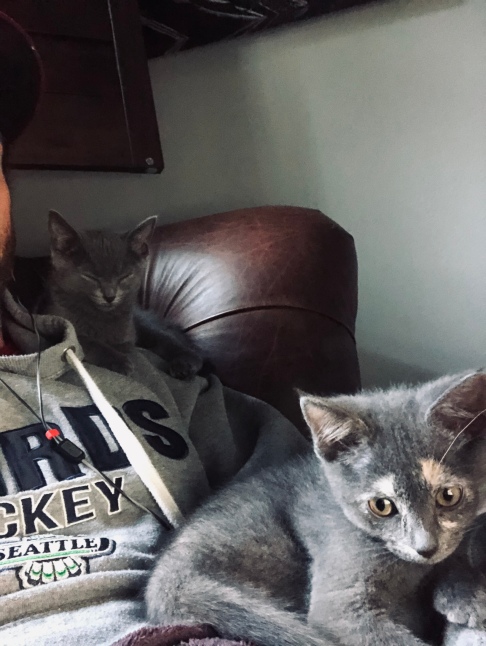 The dirt’s in around the patio. I sealed it (the patio, not the dirt) yesterday with a few coats of “wet look” sealant. It’s pretty great looking stuff. The lights are here, so I figure that’s what I’ll be doing today.

Yesterday my wife went to her appointment at the nursery (mis-typing that word introduced me to “bursary,” by way of auto-correct. A bursary is a sort of grant or monetary award for students who need it to attend college. Also something about monasteries). Yes, an appointment at the nursery. But that’s a busy place when we’re not living under restrictions. Now that everyone’s home and the weather’s getting nice, shopping by appointment was really their only option. She came home with lots of nice stuff to plant around the patio and elsewhere. If the weather holds, we’ll have a solid weekend of planting, digging, mulching. It’ll be good for us.

We need good. We’ve been running thin on patience and generosity around here. Things have sat still for too long. We are too close to each other. We are, I imagine, doing far better than many other people, so I have much to be thankful for. Still, this is all leagues below the ideal. We need new things to look at.

My favorite bakery is open down the street. I didn’t realize how unmoved I would be by this. The bakery experience is full-spectrum for me: the chit-chat with the folks working there, the pretending to not know what donut I want, the settling into a seat and listening to some ambient conversation, the nodding and saying hello to familiar regulars, and then the putting on the headphones and receding into the atmosphere of books and writing for a couple of hours. Standing on the sidewalk while being deceptively casual about my obsession with my distance from other people in order to get a donut and maybe eat it on the way home, is not the experience that’s going to bring me back to my favorite place.

I want to stroll in there, unmasked, and give out handshakes and hugs to the people I’ve come to view as friends over the last two years.

A bird just collided with the window next to me.

— How about a hug, Comrade Citizen? —