As far as plague numbers go, well, let’s just say “no change.” Single digit deaths for well over a week, maybe two. The highest has been 8. Don’t fret, there’s always odd little new emphases drummed up to keep anyone from thinking we’re doing alright. I mean, never mind whether you’re a pro- or anti-mask person, the idea is absurd that now, some four months deep and well into the flattened curve, we’re seeing intensified guidance and persuasion to wear them. Why wasn’t there such strong encouragement – right up to but not quite at the point of enforcement – back in mid-March when the schools were closing and the experts were telling us how bad it was going to be? Now that we’ve gotten dramatically better, the heightened measures kick in. Incompetence is just malice with a little ADHD.

Suddenly Muslim women around the world are all “who’s oppressed now, a-hole?” Of course none of the Muslim women I know wear a face covering, some not any kind of headscarf at all, so the joke is just there for the sake of the joke. But you can always look, and look, and look until you find the reality that suits your snark and signaling.

In the first quarter of my return to school, at South Seattle College, I took a poetry class. There was a Muslim girl in there wearing the full burqa – only a mesh screen across the eyes. Her voice could have come from a Nebraskan as readily as a Numidian, and she did not waste it on complaint, threat, and accusation. It was the Fall of 2016, and she was the only one in the room not calling Republicans racists, or barking about toxicity, fragility, or intersectionality. She did not write poems about violence and despair. Her calm and measured demeanor made me want to shut up and do better.

But then you see again the burqa and realize there’s an awful lot that sits unsettled here. There are questions to be asked, and caution to be exercised, and respect to be remembered. And, for the True Love of God, a divine need for humility. 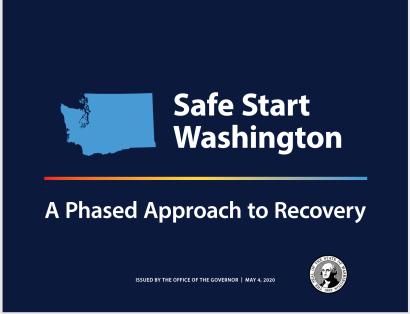 The Governor’s been putting out guidance for the re-opening of the economy in Washington, all of which I understand to be effective as of May 31, which is the current end date for the full restrictions that are in place now. The re-opening will come, you may have heard, in phases. He put out the phase 2 guidance for dine-in service at restaurants recently. It reads as a very unpleasant way to run a restaurant. All snark aside, it seems questionable whether it will be possible to not lose money under the phase 2 conditions. But I don’t run a restaurant and have no idea what any of thier books look like. And if it heightens morale and/or builds positive momentum towards the full normal, then it’s a net gain for all of us. Again, Inslee’s ability to not mire the mentality of his state in a black miasma of doom has been his principal success. I’d love for him to have been more bold and rebellious; to have distinguished himself with some degree of political courage. Of course there are an awful lot of people who will say that he has been courageous, and they’re the ones voting for him. He could at least have taken a moment to smack down Seattle’s mayor for that ridiculous park bench maneuver. (I prefer manoeuvre, FWIW)

It’s amazing how slowly time can move. I did a little extra digging around the patio perimeter yesterday, because I had the time. I’ll get an enormous pile (5 yards) of gravel in the driveway today, but I’ll only be able to move precious little of it to the patio area, as the retaining wall needs to go in first, and lower than the rest of the patio. The wall blocks don’t come until Friday, so the project’ll be mostly idle Thursday, too. I could have timed my orders better, yes, but I’m new here. I was paralyzed by the order process, worried that I’d get the wrong amounts of the wrong things, and just be left in a monumental lurch. Alas, it was time to shit or get off the pot, so I ran the numbers eight more times and made the call. I’ll definitely send pictures when my lawn and driveway have become a staging area for most of the hardscape materials in the Pacific Northwest. No shortages there – apparently nobody wipes their ass with cement blocks anymore. We’ve gotten so soft.

I did take the plate compactor on a trial run yesterday, and it was a very loud bunch of fun.

The Woman in White is off to a good start. It’s a page turner – just the sort of thing I could use right now. A few suggestions have come in from reader/commenter/friend Marica, including Pilgrim’s Progress. I read that book about ten years ago and remember it as poorly as I remember anything else, so maybe a second go ’round is in order.

Not a good post, I know. However hard the guv may be trying to keep my spirits up, he cannot. Even after receiving some very good news yesterday, my own curve is rather flat. This is, of course, the ebb and the flow, the natural course of things. I’ve put an awful lot of energy into an awful lot of things over the last couple of months, and I think I’m in an involuntary regroup and recharge phase of my own recovery.

— Dig for the cure, Comrade Citizen! —