“You is sharks, sartin; but if you gobern de shark in you, why den you be angel; for all angel is not’ing more dan de shark well goberned.” 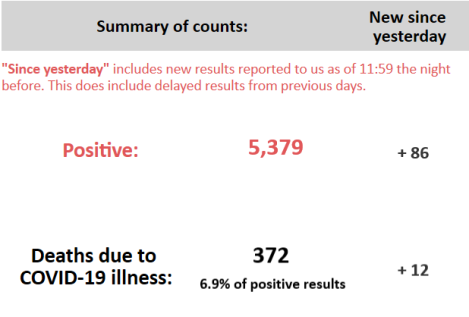 Gobern dat, Jay. He did come on and do some governing yesterday, announcing an incredibly vague and non-committal approach to ending the shutdown:

The return to public life will occur in measured steps, guided by science, and informed by our public health needs, ability to mitigate impacts, and the response of our communities.

Here’s a sexy little poster, soon to be seen in all the windows of all the businesses in the state (if they ever let us visit them again):

Yes, it is a whole lot of nothing, except that it’s a shift in the narrative. Momentum dictates everything in human life. If there’s a sense of things going in one direction, it is nearly impossible to abruptly stop, much less head in another direction. Here in the United States, think civil rights. That didn’t happen over a few short years of MLK marching around in protests and writing a single letter from jail. There were decades of movements and constitutional amendments involved in that success. Or think of feminism and gay rights, climate change. Movements that, by all evidence, have seen their apotheoses, but are completely unable to slow their momentum and show no signs whatsoever of stopping. Governments especially are preternaturally poor direction-changers, so it’s heartening to see this control over the tone, mood, and momentum of the language of the plague here in Washington. The “plan,” as it is, doesn’t include much action or specificity, but it turns the conversation into one of recovery instead of perpetual malaise, and it’s the snowflake that becomes, eventually, a snowman. I think that tone control has been a strength of Inslee’s handling of the crisis from the beginning – in an earlier entry I lauded his refusal to use the term “shelter-in-place” when everyone else was screaming it through mouthfuls of chewed fingernails.

I get annoyed at the way the word “science” is used. If you replaced it with the word “faith,” the masses would lose their minds. But it’s the same thing. What percentage of people out there have any direct involvement in any kind of science? Like 2? 5%, maybe? In fact, there’s millions upon millions of people who know a heck of a lot more about faith and about God than there are people who know anything about science, but we sit back and proclaim its infallibility like a good little flock of believers, without ever seeing any of it except what doesn’t wind up in the trash can at the lab. And nobody seems to think about the fact that whenever a scientist comes out and proclaims with confidence that condition A is true, there’s another scientist out there proclaiming that, in fact, it is B that’s true. But when B isn’t politically, socially expedient, that good old peer review process steps in to show him his seat at the back of the theater. The scientific community is as subject to corruption, money, and politics as any other organization anywhere. But the faith of the masses in the magic of the lab frock is unassailable.

The science isn’t settled – your opinion is.

I lost it a little yesterday. I was sweeping the kitchen floor while worrying that I was coming up short in the homeschooling of the Boy, after making everyone’s breakfast and doing the myriad menial things. The broom came across the Boy’s shoes, six or so feet past the line they’re supposed to cross near the door – the place where the tile transitions to wood – and that was the proverbial, unpredictable, perfectly insignificant last straw. With an uncontrolled kick I sent one of the shoes across the house while exclaiming in a violent whisper: “fucking SHOES!” The Boy looked up from his cursive practice with a freaked out expression that I don’t remember ever seeing on him before (I never swear around them). I left the room for a minute, came back, and pulled up a chair right next to him to apologize. Without looking up from his workbook he put an arm around my shoulders (he’s kind of an old soul sometimes) and said, “That’s ok, father-” (he calls me father, for some reason. I never asked it of him, that’s for sure) “That’s ok, father. We all get to have a bad time sometimes.”

Yes, we do. We most certainly do. He does, too. The group of kids that have been playing together on our not-so-dead-end street are well into the time when they need someone else to play with. They’re on each other’s nerves a bit more often, and I had to mediate another absurd falling out between the Boy and the neighbor boy. The stand-off concerned the Silver Surfer. Nothing of substance along the lines of any classic debates that might interest the comic book fans out there, just the neighbor talking about the Silver Surfer, and my Boy telling him that it was useless information, so please stop talking about it. The neighbor kept talking about it, my Boy kept becoming more and more irrationally angry, and the threats started flying. I sometimes get impatient and slip by saying something like, “Arguing about the Silver is Silver is something that stupid people who hate each other would do, and I don’t think you want to be known as stupid people who hate each other.” I might have said that yesterday, but it was a long day, and as my son said earlier in the morning, we all get to have a bad time sometimes. I have no real uber-dad strategies for these situations, except 1. defend my son and fall, generally, on his side while not neglecting to see where he’s at fault, and 2. Not believe one single word of the “he said, she said” lies that start flying when they start talking. Not from the neighbor kids (or parents, because we’re all just as bad), not from my own kids, not from the politicians, not from the pundits, and not from the scientists. Where was I? Oh yeah – five minutes later It was as if nothing had ever happened. They were sharing Cheetos and doing just fine.

My wife came down a few minutes ago, about 7:00, and said, “It looks like a beautiful morning, I’m going to go for a walk.” I should have gone with her, but I’m pretty comfortable here:

She bought me that chair as a birthday present, probably ten years ago now. That’s a forever chair.

Your “Homeless in Coronafornia” update is a bit scant today:

I checked in, he responded with that message just after I went to bed, and here we are.

I made a new page here, by the way. It’s up at the top, and all the Perfect Vision Plague Diaries are located there now, along with any intermittent and related posts.