Notes on the general state of the neighborhood, the family, and the masses in the time of the virus.

“So have I seen Passion and Vanity stamping the living magnanimous earth, but the earth did not alter her tides and seasons for that.”

Starting this weekend, Seattle will close portions of two neighborhood greenways to through traffic so people can bike and walk in the road, we’re calling them Stay Healthy Streets.

(I’m not sure about that second comma, guys) They must have heard me say that I wasn’t worried about totalitarianism. “We’ll show him.” There isn’t a grocery store anywhere near the route they’re closing down, ostensibly “To support safe social distancing while exercising or walking, rolling, biking to grocery stores or food pick-up…”

Yeah, it’s kind of an unused route that doesn’t see much traffic from anyone except the local residents, but a land grab’s a friggin’ land grab, and a power trip’s a friggin’ power trip. Besides, this virus has made the single occupancy vehicle the safest mode of transportation available, and now they want to keep us from using it.

After an initial evaluation, we are aiming to convert approximately 15 miles to Stay Healthy Streets in the coming weeks.

In the coming weeks! They’re simply not even considering an end to this. And while I’m no doomsayer, no conspiracy theorist, this is precisely the kind of “temporary” measure that finds a way to stick around after it’s supposed to go away. 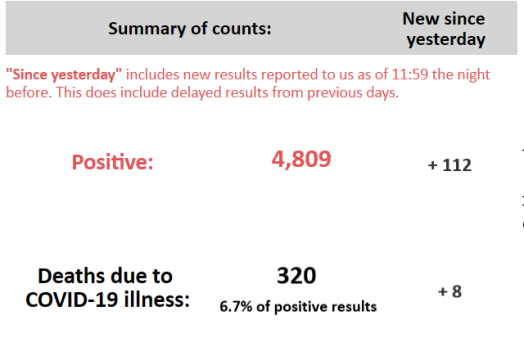 Another day in the single digits. So the Mayor’s gonna be looking hard and fast for more things to shut down and strangle before the party is over. In fact, there’s no reason to believe that they won’t use success as a reason to clamp down even more. “We’re doing so well already, more restrictions will obviously be even better!” These people have never felt more important, more needed, and they’re going to clamber for purchase on this greased pole for as long as they can.

The girl and I made cinnamon rolls today that were dry, but nice, and packed so full of sugar and butter that they couldn’t help but be delicious. I hid one away for tomorrow’s breakfast. Later she and I pulled a small table to the end of the driveway and played cards. The sun was on us, we played war. It was a solid half hour at least of forgetfulness and joy, utterly unaffected affection. I had no fatherly lessons for her, nothing for her to clean or to think about. Just light competition over the simplest of games. She’s brilliant and electric.

She’s at the neighbor’s house right now, in the backyard. I know because we just received a text from the mom over there, containing a short clip of the kids playing “the ground is lava;” balancing on swings, a slide, and in one case, a soccer ball. We’ve just coordinated her return – 9:15, which puts a bit of a twitch in my rather old-fashioned parent instinct, but this is Sprung Broke, after all, and there’s no governor here to tell them that the lava isn’t real and the slide is off-limits.

There’s been a couple of birds flirting with me out here on the porch. It’s 8:20 PM. Juncos or bushtits – tiny little things. Perching between the rails in front of me, hopping about. They just flew past my legs and I could feel them.

Your “Homeless in Coronafornia” update for today:

People go to great lengths just to spend a weekend like that. He gets to do it all the time.

— Drive through the barricades, Comrade Citizen! —