One of the more common themes of life as a human, at least as I look back over things, is not knowing what to do, think, feel, or say. All the more true in this time of the incipient plague. Like earthquakes, winning the lottery, and getting published, I’ve got that undeniable sense that it will most definitely “never happen to me.” (He said in an election year.) And as the man in the song says:

“the agony and the irony, they’re killing me.”

Whatever that digression was about…

I do wish that we would go back to calling it a plague. I like what Merriam Webster gives me online; this introduction to misery and despair:

plague
noun
\ ˈplāg \
Definition of plague
(Entry 1 of 2)
1a : a disastrous evil or affliction : calamity
b : a destructively numerous influx or multiplication of a noxious animal : infestation a plague of locusts
2a : an epidemic disease causing a high rate of mortality : pestilence
b : a virulent contagious febrile disease that is caused by a bacterium (Yersinia pestis) and that occurs in bubonic, pneumonic, and septicemic forms
— called also black death
3a : a cause of irritation : nuisance
b : a sudden unwelcome outbreak a plague of burglaries

2b sounds suitably scientific, and that’s what we’re all after these days. That’s why we don’t call it a plague. We call it a what?

We call it an epidemic. Now that’s science-y! Our saviors can do something about that! Scientists: the people who settle disputes in an indisputable manner, who answer questions with unquestionable answers, and are never to be doubted (except when it comes to food and biological sex; then suddenly they’re a bunch of Keystone Khemists who have no business telling us anything). Test tubes, beakers, swabs, and acronyms! An epidemic doesn’t stand a chance.

But then 2b dons its plague doctor mask, and descends upon us with the “black death.” 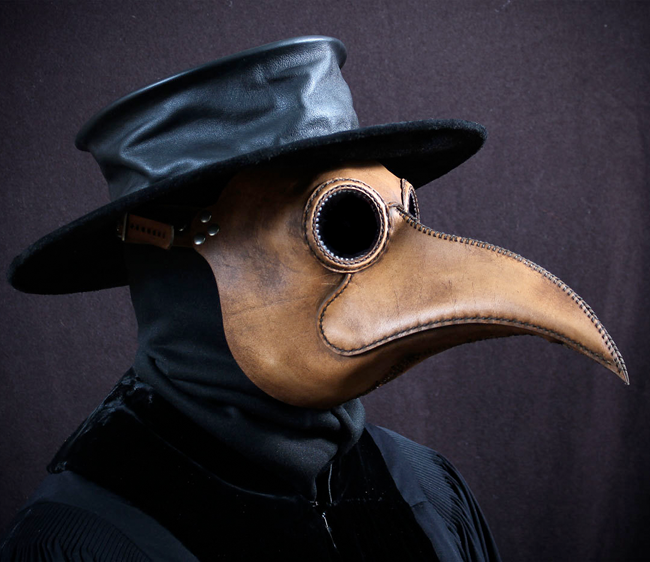 Call it the black death instead of an epidemic and things seem pretty hopeless, don’t they? I mean, just add it to definition 1a up there: “Evil.” “Calamity.” We don’t have labs for evil and calamity, much less black death.  We do have art, though:

And there’s literature, from Defoe to Camus, and a little work you may have heard of that’s called, in some circles, The Bible ((science has declared a hyperlink to be unnecessary in the case of The Bible (A little joke that I’m now recognizing has substantial depth to be explored, depending on your sleep and electrolyte levels this soon after DST clock changing)).

All of which is to say that I don’t know what I am saying, or what I want to say, or how to thnk or feel about it all. We have a germaphobe in the house already, so there hasn’t been much of an uptick in the previously sensible sanitation habits (though between me and the kids, our germaphobe hardly stands a chance).  And I find myself reading King County Health reports very selectively, for the information that helps me to not be concerned – all the dying people are old, they all came from the same care center, etc. There’s not much of a reason to give it any thought at all, as long as I do it like that.

I barely remember the swine flu or the bird flu, which are much cooler names, BTW, than Coronavirus, but there’s probably something worth examining in a society’s tendencies when naming it’s disasters – do we shoot for sensationalism? Gravitas? Humo(u)r? (our ancestors would certainly have much to say about the humors in the time of a plague).  I do know that we fancy ourselves a very intellectual culture and society here in the US, and “unseriousness” is frowned very seriously upon – he said, yet again, in an election year.

And I have to say, though I’m sure it’s just coming from the macabre child that will not release its hold on my soul, that I envy a society that called its affliction something so dour, dire, and distraught as “The Black Death.” That’s beautiful. Succinct. I don’t think we’d ever do that. I already note how unwilling people are to joke about this outbreak, and resistance to humor is another mark of a society that overvalues intellectualism amidst a dearth of it. Comedians are brilliant, and geniuses tell huge jokes. But mediocrity (and we are mediocre, on average – definitions and all that) – mediocrity poses and postures, and adopts a serious tone, because it adapts poorly to things that stray too far from the line it clings to. Mediocrity hides best when it moves least, and there’s nothing more stagnant than humorlessness.

I had no idea I was going to go there. But here I am, talking about fear and humorlessness in the time of plague, and in an election year, blah blah. Of course it’s somewhat overserious of me to draw that comparison at all, which fact brings swimming back to me what the man said in the song, and what I already laid out above:

“the agony and the irony, they’re killing me.”

3 thoughts on “In the Time of the Virus We’re Not Sick, but…”