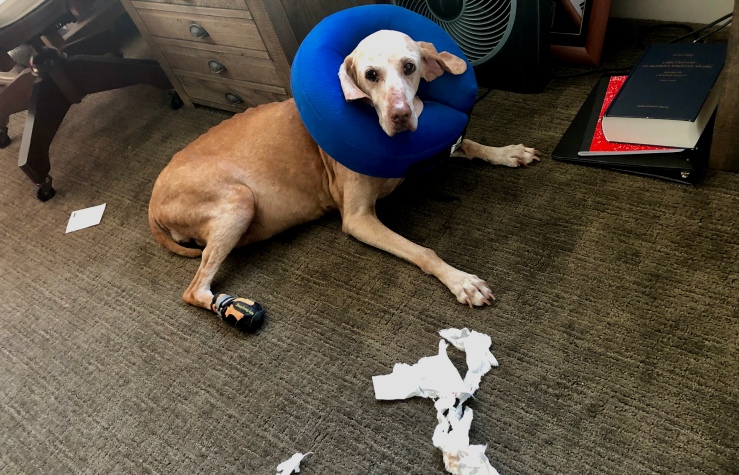 If there is anything that is guaranteed in life, it is that we will love things that are not good for us. Few loves are ever a pure win. Some are calamitous. Most are in between, and most of those lean significantly towards the good. Tilting loveward is our most incorruptible instinct. It is the one thing we do that always moves in the same direction as God, so it is the movement that makes us both most human and most divine.

It is why we love our dogs, so often doing so not because of them, but in spite of them. The strife and inconvenience that they bring to our lives almost immediately outweigh the joy: the ruined rugs and floors; the shoes, furniture and walls chewed to pieces; the holes in the yard and the fence, the running away. The vet bills. The apologies to the neighbors and the boarding expenses when we go on vacation (if we still take vacations, now that we have a dog). The piles of dog-specific clutter that enters our homes and disrupts our lives from deep down in the Feng all the way up to the shui. And unless you are a full time hunter or a sled driver in the Yukon, the return we receive on this investment in chaos is rarely more than a wagging tail and yet another body that we didn’t invite into our bed but is there anyway.

Yet for all that, we look one time at some oversized paws, get nipped by those tiny piranha puppy teeth, and smell that unbelievably sweet vanilla-maple perfume down in their downy coats, and we tilt ever harder loveward.

The years go on and some of the early worries vanish, along with the amount of free space left on the bed. They are years on cruise control when the young dog mostly behaves and our lives are are an often mechanical, sometimes poetic routine. “This is why I got a dog,” we say and mean it because her coat is rich and full and as she naps after hours of running in the park her breaths come easy and even. We don’t know why but suddenly we want to invite friends over. We want people around us, and our dog. We want to show off a little.

The years continue to go on and some of the early worries start to return, along with the amount of free space on the bed because she can’t get up there anymore. We tap the brakes and adjust our speed more frequently. “It is difficult to have a dog,” we say and mean it because the mature dog has some new dietary needs and her coat is thinning and her face is turning white and as she naps after a short walk down the hill to the mailbox her breaths come with a slight wheeze and catch. We don’t know why but suddenly we want to sleep, too. We want to be alone with our thoughts, and our dog. We want to cry a little.

So yes, it becomes increasingly difficult to say, honestly, that we’re happy we have a dog. Yet for all the woes that I could easily catalog over the 15 years of a tumultuous life with our dear Lucy, I find us undeniably diminished by her departure. She died yesterday, medically induced. It was a decision we made based on the fact that for however much longer she might go on, every single day would be both her best day remaining, and also worse than the one before. We did it for her. We did it to let her go out on the highest note she had left.

We could have had it done at home, but at the vet she was well known and even better loved. We sat with her there on the floor and as the sedatives took effect the whole building seemed to sag with her muscles. She worked her way at first voraciously through the pile of treats that the doctor set before her. Then she forgot them, rested her chin on the blanket, and let her tongue hang comically and adorably from the front of her mouth. The rest was done with a somehow tender clinical ease, by way of two more injections, and she faded gently out from there without so much as the tiniest twitch or final significant breath. She was just still there – only not – and there was no longer anything we could ask of her. That, I suppose, is the final gift: that she no longer has to wonder how to make us happy.

She could have gone on for a while, survivor that she was. As a pup she was bitten in the face by a rattlesnake and barely flinched. I, on the other hand, drove so fast and recklessly to the animal hospital in a rented roller skate of a car that news helicopters were being scrambled.  Years later, the new dog we got to be her companion wound up turning on her and attacking her brutally several times. We found that dog a new home (literally – not in an “off to live on a farm” kind of way). She had food allergies and skin conditions and more medical issues than I can list. But in the end there was always Lucy, waddling bow-legged along and pawing her nose at a world that seemed bent on holding her back. She kept going.

But the joy was gone for her. She really just slept through any stretch of time in which she had no reasonable hope for food. She followed us to bed but could barely manage the stairs. Life was naught but compulsion and habit, and was only getting worse, so we let her finally get off those aching legs of hers forever.

We remember her best, perhaps, driven for years by a steroid imbalance that left her with an improbably large liver and a literally insatiable hunger for food, rushing to the kitchen whenever she heard the dishwasher open so she could scrounge up any scraps she could reach. She lived to eat, and she died among food.

I only ask her to please, just once, make sure to poop in God’s living room on Roomba day. My children can attest that it might be the only time you ever get to hear Him swear.

In her life and again in her death, Lucy tilts us loveward. 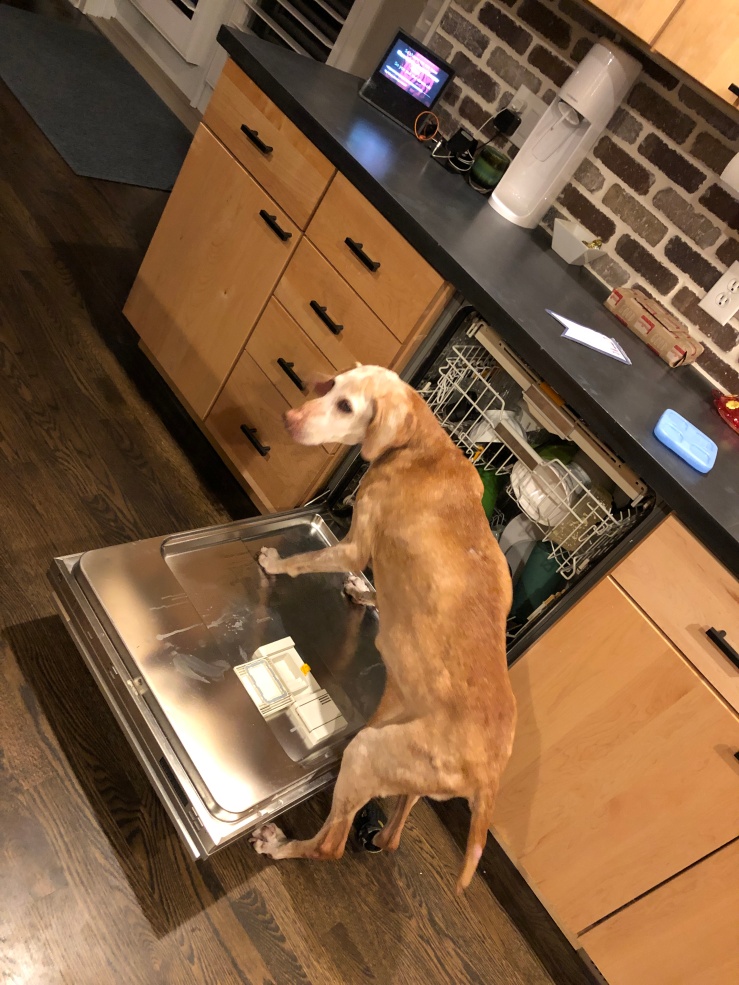