Oxford comma, people of the world.

Looking for the return of these days: 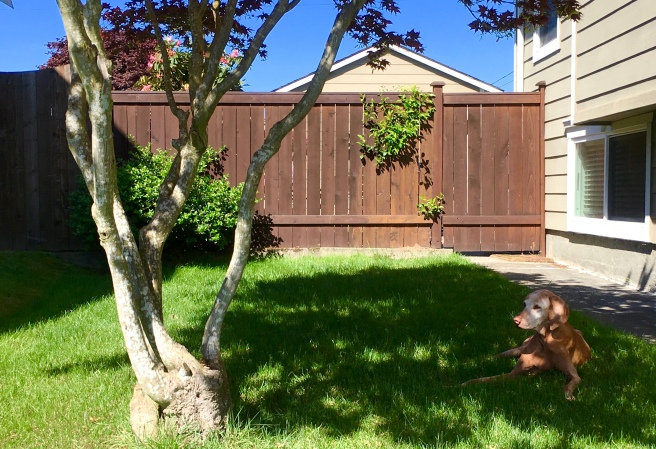 This started as a Facebook post, but then I remembered that I like to write, and the only thing less credible these days than a blog is Facebook.  There was a time when I told myself that, in order to get back to regular writing, I should note the times that I am about to post to FB, and come to the blog instead. It’s amazing how difficult it can be to resist that vanity of mass exposure and ‘likes,’ and instead face the burden of saying something substantive in a relatively unviewed forum.  But of course, if you have the wit for it, you can say some pretty substantive things in a short FB post, too.  The only problem with that is that you might be the only person who gets it.  What I found out, ultimately, was that the best way to get back to writing regularly is to go take a college English class.  The audience tends to be pretty small, but I’m wearing out my keyboard these last two months. And my brain feels so much more efficient and useful. It’s a whole new world.

Meanwhile, Americans ate a red, white, and blue cupcake for every dead civilian. I gave them the Rape of Nanking.

School.  First quarter in two decades. I think we’re on the verge of week 9 here. 4 weeks to go. Here’s an update:

Looks like I got high and stayed high, which I believe is the point of college. Success! I’ll have that Philosophy grade up a point or two before this thing is over. English is fun, the kind of teacher you want to have – lots of work due pretty much all the time, well structured, and pretty uncompromising. I heard a few students, in a concerned but friendly group, asking her the other day: “Does ANYONE get an A in your class?” Those are nice moments. She did give me more credit than I thought I deserved for an outline that I turned in unfinished, but I also proactively followed up with her about it in office hours, and asked for her help.  Also, it wasn’t exactly a tiny little effort, sparsely populated with detail and info.  It was two pages of deep research that contrasted favorably against the other submissions from the class. I just kind of hit a wall with it and didn’t know where to go. And frankly, I panicked.  It was the first point of confusion for me in that class.  I had been so driven, so directed, and then I just got flippin’ sick of voter ID laws and couldn’t find a single way to add interest to the topic. She helped pry me loose and get me going, and while I’m not really using any of her ideas, it was the process that did it. I’ve considered seeing if she really meant to give me full credit, make sure I get the grade I deserve.  But a couple of points on that lightly-weighted assignment, against a 98% overall grade, won’t be much of a difference. Makes as much sense as doing extra credit at this point – posturing more than anything.

My History class may be getting a little tired of me doing things like obliquely defending the Imperialist perspective in Burma. I said that by shooting that damn elephant, Orwell demonstrated the chasm of philosophical sophistication that existed between the British and the Burmans. Kind of takes the guesswork out of colonial relationships. Everyone else did the usual:  white man bad, noble brown people, etc.  Of course imperialism sucked, by and by, but national borders were spreading like peanut shells in a honky-tonk, and imperialism needed time to prove itself a nearly irredeemable hell of impossible harmony. It was not, in my estimation (and in most cases), preemptively evil.  It was opportunistic and optimistic, but as our hindsight tells us, doomed to fail from the outset (after a boatload of initial success, of course).

Then President Obama talked about the bomb, and we were asked to talk about Truman and how, AS EVERYONE KNOWS, the Japanese were begging to surrender, but Truman simply sniggered and nuked them anyway. Meanwhile, Americans ate a red, white, and blue cupcake for every dead civilian. I gave them the Rape of Nanking, “decisive battle,” Japanese civilian militias, all that.  That an American official mentioned that “We had 100,000 people killed in Tokyo in one night, and it had seemingly no effect whatsoever.” That the consensus among the scientists who made the bomb, not the military, was that a low-casualty demonstration over Tokyo Bay would not prove to be a deterrent, and we’d have to just drop one on a city anyway.  Still and ever, America is/was SOEVIL that Truman wasted no thought on murdering 200,000 Japanese civilian and military to show off for Stalin. So much more plausible.

Symbolic logic continues to confound (not an accidental segue).  I’ve had a few video conferences with my instructor, one Anthony Ferucci.  Young, Italian as cannoli, affable and sharp.  That Roman nose, which I think you can say without being accused of racism because Italians are ersatz white people. He’s crammed in a tiny office at the University of Washington, trying to scribble rules of replacement, conditional proofs, indirect proofs, and all manner of other hieroglyphs on a white board in the corner behind him, while I wonder at the bags under my eyes that my image on the laptop shows me. Nothing exhausts my mind like these proofs. Intellectual weight training.

It rains here today, or at least threatens to, as we completely expect on Memorial Day weekend.  The going joke in Seattle is that the sun comes out on July 5th.  As a rule, I don’t like “the going joke” in any given situation. Recycled cleverness is about as true to its source as leftover pasta. However, this one I find myself making when the chance arrives. It tends to fit, and a fella has to fit where he can, too.