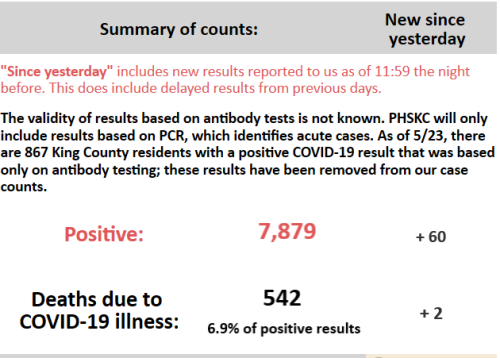 I’m just a guy who’d rather not be awake just yet, but cats.

2-5 daily deaths in a county with 2.2 million people is not the sort of stat that has me checking the toilet paper supplies, just to be sure. I would almost guarantee that, in any population of that size, including a major urban area, some other thing kills at least that many people every day. Cancer, gang violence, seagulls. Something.

June 1st fast approaches. That’s the last target date we received from Olympia for ending the stay-at-home order, mandate, strong suggestion, we-can’t-force-you-but-just-you-test-us, whatever thing. There isn’t a much better way to lose support than to set dates and continue to move them back, and I have to believe that any further extension of this condition beyond June 1st is going to be the beginning of noteworthy unrest. And no, I don’t mean revolution and armed conflict. But beaches and parks will be swarmed, closures will be ignored, businesses will open in defiance. And of course there will be more of the marches and protests that have already occurred, and which the Governor has been very condescending and dismissive towards. I don’t like any marches or protests. Something about them, no matter the cause, makes me rankle with disappointment and unease. It’s a sort of legitimized mob-rule. A designed, large scale antagonism that pretends to be all abashed, suddenly, when it receives pushback from authority. Any large group is at least 90% mindless momentum, and that’s all kinds of dangerous.

In any case, this week should bring something noteworthy from Governor Inslee. I think I’ve done alright at noticing his successes as well as his failures here, all while never forgetting that no matter what he’s doing, it only comes after a careful consideration of where his votes are coming from, and whether a run for President is in his future plans. I’m generous where it’s warranted, but politicians want absolutely nothing except re-election. Morality gets a condescending head pat and is sent outside to play in the rain. Sometimes politics and good choices do align, absolutely. But it’s always the politics, and never the good, that drives the choice.

Memorial Day weather was lousy. It cleared up enough in the evening to grill some steaks. I managed the charcoal poorly, being a bit rushed, so the overall quality was down a smidge from what we’re used to from me. Here in affordable Seattle, a steak at one of the big steakhouses can easily cost $80 for 10 ounces. The price screams upwards from there for all the Wagyu flying around these days. We rejoice here at The Haven when we can buy a couple of fat cuts for under $20 and make them taste even better here at home. And without all the stifling formality.

We took a 3 mile walk around Lincoln Park, amid the forests of pines and signs: “Park closes at 8:00,” “this is what 6 feet looks like,” “keep it moving,” “play area closed,” etc. The bad weather kept the crowds down, and it was by far the lowest number of people we’ve seen there in the past couple of months. It is still somewhat exhausting, though, wondering and worrying about what’s in the minds of everyone you walk past. Do they think you got too close? Do they think this is all nonsense? Am I being respectful enough of my fellow citizens while maintaining my right to approach this thing in the way I think is best? I’m so sick of it all.

My wife went to the grocery store for the first time in what, almost 3 months now? I’ve been to Home Depot several times, but otherwise we’ve gone nowhere. And even then I’ve only done the curbside pickup, where they bring my order out and put in my car so that I don’t even have to get out. Yesterday I went inside Home Depot for the first time, to visit the customer service desk and arrange a propane exchange. The amount of plexiglass and floor tape was staggering. The X’s on the floor that said “stand here” were not aligned with the cash registers (is that what they’re called now?), so you couldn’t obey the mandate of the adhesive without a very awkward exchange between yourself and the associate. But if you just positioned yourself where you naturally would for that sort of interaction, you weren’t on the X. Such dilemma. And it turns out that no matter how many people you see every day walking around with some kind of mask on their faces, it’s unsettling, odd and unnerving to put one on yourself in public for the first time. I felt so self-conscious, though I know there was no reason to be. Have I mentioned that I’m sick of all this?

Anyway, the grocery store. This is a city, so grocery delivery is so readily available and convenient that we got kind of comfortable in the routine. But we’ve been getting crazy here, going nowhere, and so my wife chose one of the 9 (at least) grocery stores within 4 miles of us, and headed out. Her report? Meh. It was pretty quiet out there. Some people without masks, which is a criminal offense in some minds, and a non-issue in others. She came home, unloaded the groceries, and found a pear that she probably wouldn’t have gotten in pre-plague times, when it was ok to pick up a piece of fruit, look at it, then put it back. But overall the produce was the purpose – fruits and veggies are often very disappointing when the groceries are delivered.

Last week I returned to a good sized short story that I was writing, sporadically, before our little gift came from overseas. It has racism and the gripping dilemma that a college educated city girl on a hog farm in Indiana has to face, between defending her female friend (#metoo! #believewomen!), and defending a well-liked illegal immigrant, a long time member of the community. The uncomfortable convergence of disparate social justice priorities, when one must be chosen over the other. There’s even cats. It’s got 17 pages to it, which makes it the longest single piece of fiction I’ve put together. I wrote several research papers and essays that touched the 25 page mark in college (just a couple of years ago!), but that’s not the same. For a guy who writes a lot, it seems odd to be impressed by writing a lot, especially when it isn’t even a lot. I need to aim higher. That’s what the novel’s for. At the beginning of the lockdown I was working steadily on it, with a well-established routine. Some chapters laid out, several scenes and dialogues written, lots of notes. I worked at the same time every day, in the same place. I said to myself “when this whole Wuhan virus thing is over, I’ll get back to it.” Seemed reasonable. Homeschooling The Boy was happening in my usual writing time. Well, that particular hospital ship has clearly sailed back to its home station, all unused and unloved, so it’s time to rearrange the priorities and the mind a bit and get back after The Work.

So, Tuesday. One of the final weeks of homeschooling. It’ll be rough when school’s out for the Summer and the kids are home all the — Christ. I had a wild dream last night that I was still teaching The Boy, but we were doing it at his school, which was actually my old Jr. High School in St. Charles, Illinois (hello, Haines Jr. High!). He was resisting his work, so I said “Fine. You’re just not doing school anymore, I guess. You’ll just have to do nothing and see where that gets you. Let’s go home so we can be there when the police arrive to talk to you. The school has to call them and let them know that you’ve quit.” He started freaking out, his teacher walked in the room, and I realized (as we always do in these situations) that I was in my underwear. I’ve had the naked at school dreams before, but only as the student.

When I go in for these weekly schoolwork exchanges, it’s just like Home Depot. I pull up and pop the trunk, one of the 3 teachers on duty pulls last week’s work out and replaces it with this week’s new material, and I’m on my way. But we always chat some through the open window of the car from whatever distance they keep. It’s definitely 6 feet. I don’t wear a mask. Again, I have to wonder whether they think I’m a grandma killer (that’s the metric, you know), or if they think nothing of it. I’ve mentioned, perhaps, that I’m sick of this? Of the ever-present suspicion and paranoia? If I haven’t mentioned it before (though I strongly suspect that I have), consider it mentioned now.