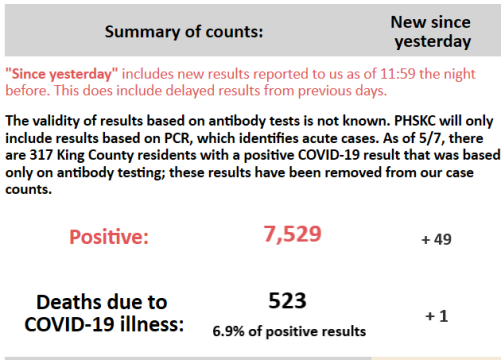 I’m just a guy who was kept up all night by cats.

I’ll accept a temporary tax hike to pay for intensive testing and tracking of the regular flu next year – everything they’re doing for the Wuhan Flu, without all the tyranny. I’m just curious. I just want to see. You know, data and science. All that.

I heard someone the other day say why it was so important to close churches. Now, this is probably widely traveled stuff by now, but I’m pretty news-deprived, and I don’t tend to hunt down the details when I hear that liberals and conservatives have different ideas about what should be done with churches. So this information was new to me, and I utterly failed to swallow a chuckle when I heard it:

I am against, ever and always, the replacement of joy with fear.

I went to pick up The Boy’s school packet for the week, and drop off his completed work from last week. That’s been the only shortcoming from his school – I have no clear guidance on exactly what to turn in. There’s just a bag full of stuff every week, a schedule for what to do, and a couple of things clearly marked “do not return to school.” Other than that, I just kind of pile up everything he’s done and send it back. In the first week, his cursive workbook had a note on it that said “return for corrections,” and that it would come back on the next available pickup day. So I turned it in. 3 weeks later I asked about it and they rushed someone to our house to drop it off because it has to be completed in order to move on to 4th grade, and now we’re 3 weeks behind. It’s alright; there isn’t that much to do, and he doesn’t mind working on it. Still, he panicked and cried when he heard that part about not getting out of 3rd grade.

As he always does, he recovered very quickly got to doing what needed to be done.

They’ve sent home seeds and a tomato plant. we’ll participate selectively in the gardening. We don’t have very many sunny spots at all, and I’m not building any contraptions to help things along. I know how to garden on a very simple, amateur level, and I can teach them easily enough. I’ve grown things. It isn’t rocket science. One of the packets is pumpkin seeds. These will not be planted. I have no interest in pumpkins, and having grown a squash before, I know the obscene sprawl of those plants. No thank you.

Here’s a piece of a conversation I had with my brother yesterday. He was being belligerent, and I have a hard time being generous when that happens:

I did a little more work on the patio, but didn’t take any pictures. The sand was still so wet that I had to spread it in thin parcels on the driveway and let it dry for a couple of hours before using it, so it wasn’t a day of great progress. Today, though, should see me just about finished. Except that’s never true: I still have to lay some drain pipe and backfill the wall, build up some soil around the exposed parts of the perimeter, and install some lights. I’m a little tired of shovels and rakes, I’m here to tell you.

I’ve heard plenty about how they like the warmth of the keyboard, but this won’t do: